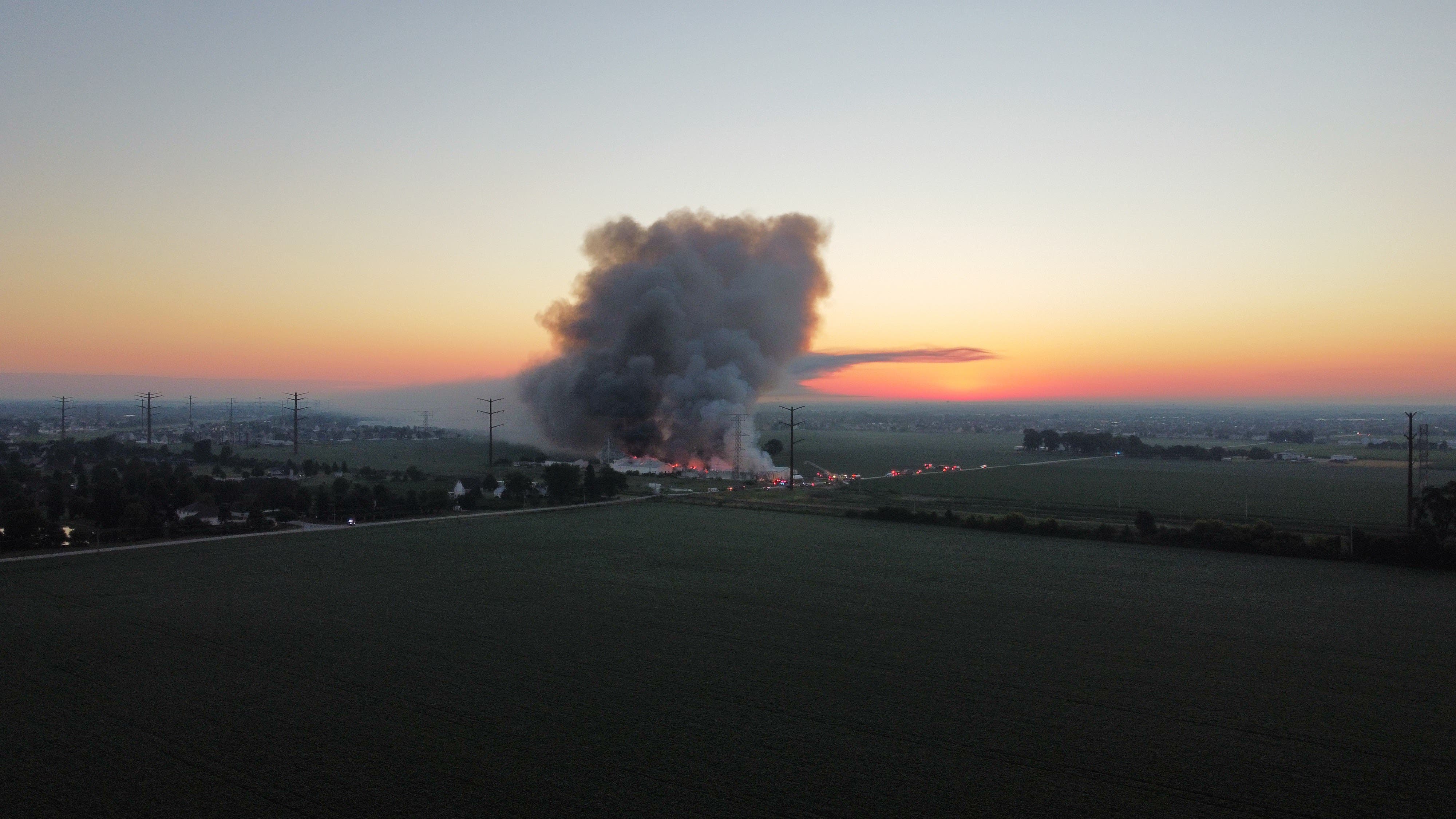 “The fire is under control, but there are still some spots that are burning,” Doyle said. “We’ll probably be out there all day or into the evening.”

Nobody was injured during the blaze.

“Nobody was there,” Doyle said, noting that it may take a couple of days before fire investigators are to get inside the pole barn buildings where the fire began. The front office building where customers make their purchases was not engulfed by the flames, the fire chief said.

Chickens and two exotic birds that were in the building were rescued by emergency personnel, Doyle said in a news release.

He said that fires such as this are difficult for firefighters to battle because the walls of the pole barns began to collapse and create more hot spots.

Tri County Stockdale went up in flames Tuesday morning at 4:30 a.m. It’s one of the biggest fires in the Joliet area in recent years. Fire engines from as far away as Mazon and Newark were responding to the emergency by 6 a.m.

Doyle said that at least 50 to 60 firefighters from approximately 15 different fire departments throughout the region helped Troy extinguish the blaze.

The fire engulfed several of the pole barns where chemicals, fertilizers and pesticides were stored, producing a toxic smoke when they burned. Tri-County Stockdale also sells animal feed, Doyle noted.

Shortly before 6:30 a.m., the Troy Township Fire Protection District announced on its Facebook page that “Troy FPD is currently working a large structure fire in the 25000 block of Black Road in the Village of Shorewood. We have multiple agencies on the scene assisting. We are asking all residents within 2-mile radius northeast of the location to shelter in place due to the smoke. We are monitoring the smoke for toxic fumes and the EPA has been notified.”

However, the shelter in place has since been lifted, Doyle told Patch. Residents who have respiratory issues should call 911 if they experience breathing difficulties, officials said.

The fire created a giant cloud of smoke over the Plainfield area.

The Will County Sheriff’s Office had deputies posted along Black Road west of River Road to block off traffic. Joliet Patch saw the owners of Tri County Stockdale pull up to the sheriff’s deputies, letting them know that the fire was at their business.

The deputies let the owners pass through.